Marco Iozzi is a matte painter and concept artist who has worked on lots of blockbuster TV shows and movies. Find out how he used VUE in production.
Interview VUE
Share

Marco Iozzi is a matte painter and concept artist. With years of experience under his belt, Marco has worked in the visual effects industry for many well-known feature films and television series (Game of Thrones, Black Sails, Lost in Space, The Gifted, Angels and Demons, Charlie and the Chocolate Factory, and Harry Potter and the Prisoner of Azkaban). Don't miss what he has to say on his experience using VUE in the entertainment industry! 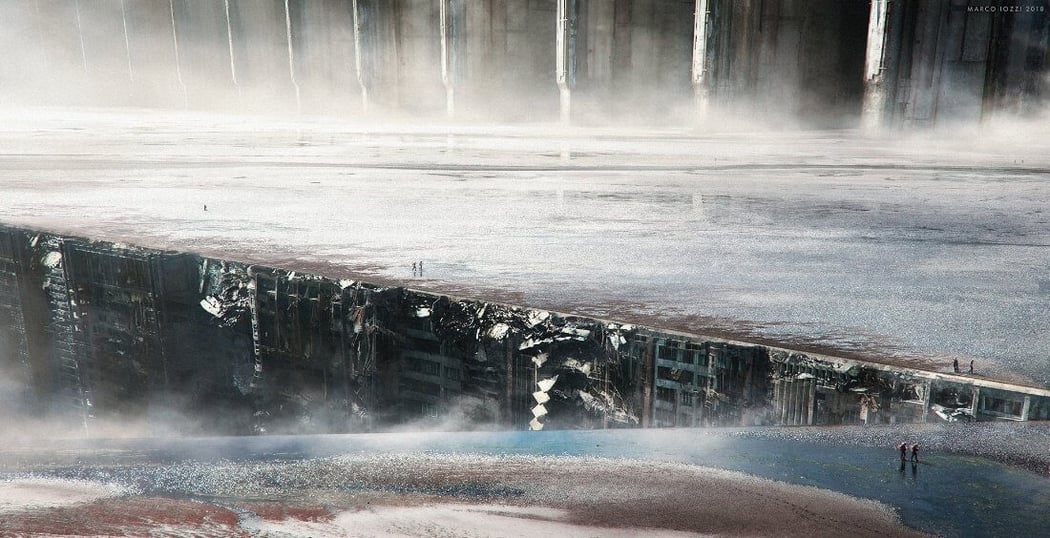 I’ve been working in the industry for 17 years now. At the beginning and for the first 12 years of my career, I worked as a 3D artist, a generalist first, then mostly doing shading/lighting and rendering. From that I moved to look development and, because of my passion for traditional photography and my studies of design, I slowly moved towards matte painting. Now I’m also “knocking on the door” of concept art, combining my previous experiences and knowledge of 3D/2D, photography and design. As a teenager I was an absolute cinephile, so definitely film and TV were my love. At that time, I discovered a TV show called Movie Magic, where they went backstage and explained how movies and special effects were made. I was blown away by it, and I knew that was what I wanted to do. I didn’t know where to start, what to do, etc., but I knew it. A lot of colleagues knew this after watching Star Wars. For me, I would say that it was more Blade Runner and the work of Ray Harryhausen that made the difference.

As I said, 3D was my beginning, and it’s now a tool I use very often. Today, I’m a matte painter and concept artist. For me, it has always been about evolution and renewing myself, probably because I’m extremely curious and could not stand the same job for a lifetime. The aspect I enjoy the most is being on a never-ending learning path, fighting the frustration of failure everyday and trying to learn from it each time and from each experience. It might be cliché, but it’s true that, in this business, it’s the journey that matters.

After many years of working on site with teams, I’ve now been working remotely as a freelancer from my studio in Paris for the past 5 years. My career goal has always been to achieve a point where I could have the freedom to work from wherever I wanted, ideally choosing the project, and above all, deciding what to work on and when. Is it always the case? Not at all. It’s a constant challenge to be a remote freelancer. What makes the difference is how you spend the time between client work, but I can say the past few years have been great and I can’t complain. Because of this, my daily routine varies. I’ve been a night owl for many years but now, I have a family. So while there are still times I stay up late, I generally favor an early morning with a good breakfast. Afterwards, going through emails, I "bite" the hardest task first. For lunch, I mostly go running every day, because physical exercise, in my case, is absolutely needed. I’m 41 so I do not have the same energy I had 20 years ago when I was just starting out, so I need to keep my body in check and in shape as much as possible. Mens sana in corpore sano is an extremely valid motto.

I tend to spend two hours or so in the evening with my son and my girlfriend, but in the evening, when everyone sleeps, I usually stay up a little bit more to study traditional drawing and painting. I did not have the chance to study fine art and, after studying design, I immediately dove into 3D, doing more and more concept and painting work, I need to go back the basics to strengthen the fundamentals. Plus, after so many years of using technology, I love to get my hands dirty with charcoal and paint. Before I go to sleep, I always try to read a little bit. For me, reading is another important pleasure, as it enriches creativity and the visual library.

I want to get better at design and concept work, because ideally, I would love to create my own worlds, from conception to final execution. That has been my goal since the beginning.

I have a long way to go, but I enjoy being on the path and having the goal clear in front of me.

I’ve been using VUE for quite some time now. For me, it’s a tool in my common workflow. I use it because I love the very realistic atmosphere rendering and I like to design the lighting for my environments with it, before going directly to Photoshop or to another 3D software. My workflow relies on different software’s, and I vary it depending on the project’s needs. VUE is definitely part of my toolkit, and the interaction with other software is pretty important for me. I always follow the principle, take the best of each software that allows me to achieve the goal in the shortest amount of time.

I like and use VUE for its rendering capabilities, and it gives you the possibility of designing a lighting scenario with a very good rendering pass system. I often use the output as the basis for my painting, or an indication/concept for a look I’m going to achieve with Maya/Arnold.

Photoshop is obviously the main software for me, but 3D-wise, outside of VUE, I use Maya/Arnold, Keyshot, Zbrush, and 3D Coat for modeling, and when I deal with complex environments I also use Nuke and Mari.

Learn the fundamentals. Software will keep on changing, and you’ll adapt, but the basics will always make the difference, not the tools. Too much technology will make things look similar and without a soul, but tools should be there to allow us to express ourselves but becoming a slave to those tools is a big risk. The traditional art fundamentals will allow us to develop our own voice, and then use the tool to reach our goal. We must have something to say, and this does not come from a machine.

I get my inspiration from films, TV and books, but also what’s around us, such as nature and architecture. I tend to look at other people who work less and less. It can be frustrating (so much talent around) and risky because, instead of doing what we love and how we love, we’ll try to imitate. I prefer to study the traditional work of old masters rather than copying the latest amazing concept art or painting by a well-known artist. But it’s my personal opinion.

Finally, as a matte painter and environment artist, I think VUE is a software to try, learn and use however you see fit. Some of the tools I find and use with this software are invaluable and are not easily found elsewhere.

Thanks Marco! Check out the rest of his awesome work on his portfolio www.marcoiozzi.com