New update for PlantCatalog is out

We just released the new plant update for PlantCatalog as well as a new database to explore.
News PlantCatalog Release
Share

the new update for PlantCatalog was just released. For those of you who have never heard about PlantCatalog before, let me explain it quickly.

PlantCatalog is an evergrowing, standalone collection of high quality, procedural, animation-ready 3D vegetation models which fit into any VFX, archivz or real-time pipeline and which can be imported by most 3D applications.

With one annual license for the Catalog, you receive immediate access to all species, to the PlantCatalog Exporter and to integration plugins for major DCC applications.

Using these tools, you can edit and customize the plants with multiple features such as presets, published parameters, health, maturity or season to your liking and then export static or animated polygon meshes in a variety of 3D formats.

You can also generate an infinite number of variations from each species. Everything is built into just a single model. Best of all, everything you export is yours to keep and own forever, even for commercial use. 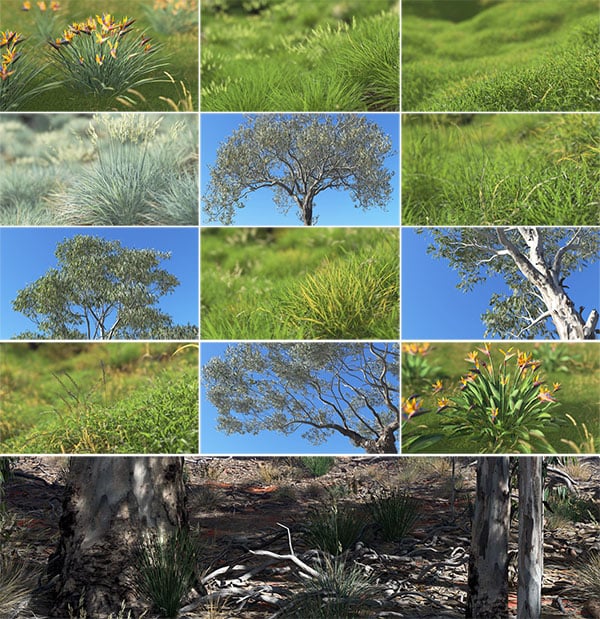 Alongside this new release, we have added a full database of all PlantCatalog species with product pages to our website. So whether you are looking for inspiration or would like to know more about the features of a specific model, we hope you will enjoy the addition.

And finally, we created a dedicated YouTube channel just for the PlantCatalog. There, you can watch all PlantCatalog species in action. Subscribe and don't miss out on the next updates to the Catalog.

The new R6 update for VUE and PlantFactory is right around the corner and will include new export features such as USD (Universal Scene Description). These features will also be made available for the PlantCatalog Exporter and the included plugins upon release.

Also, we have received requests for more broadleaf trees common to Europe and North America. We are currently working on adding them to the Catalog in the coming releases.