We are happy to announce the immediate availability of PlantFactory 2023. This is one of the biggest PlantFactory releases we have ever had, filled to the brim with new modeling features, workflow and QoL improvements and export and integration enhancements.

Head to the Software Center to get the update right now.

As announced in our recent blog post, this release has even more in store for Creator users: Creator now includes the same feature set as Professional. This means you can now export your PlantFactory plants as meshes for other applications than VUE and you get access to the PlantFactory integration plugins.

Please note that with this feature parity between the versions now being in place, anything created with the Creator version is limited to non-commercial use only.

We also updated the trial version. Visit the trial page to get your evaluation copy.

Create custom meshes with the new cutout leaf node by placing points on an underlying texture. This is a must-have feature for working with atlas maps and for creating vegetation for games.

The algorithm takes care of generating the polygon subdivision within the shape you define. You can influence the generated topology flow by placing additional vertices within the shape boundary. The mesh can be fully triangulated or switched to a version that favors the creation of quads over triangles. You can change the size of the generated polygons non-destructively along X and Y and you can subdivide the mesh as needed to generate higher resolution geometry for closeups. A rib edge can be optionally included in the polygon flow to ensure that the resulting mesh can be folded and deformed well enough. 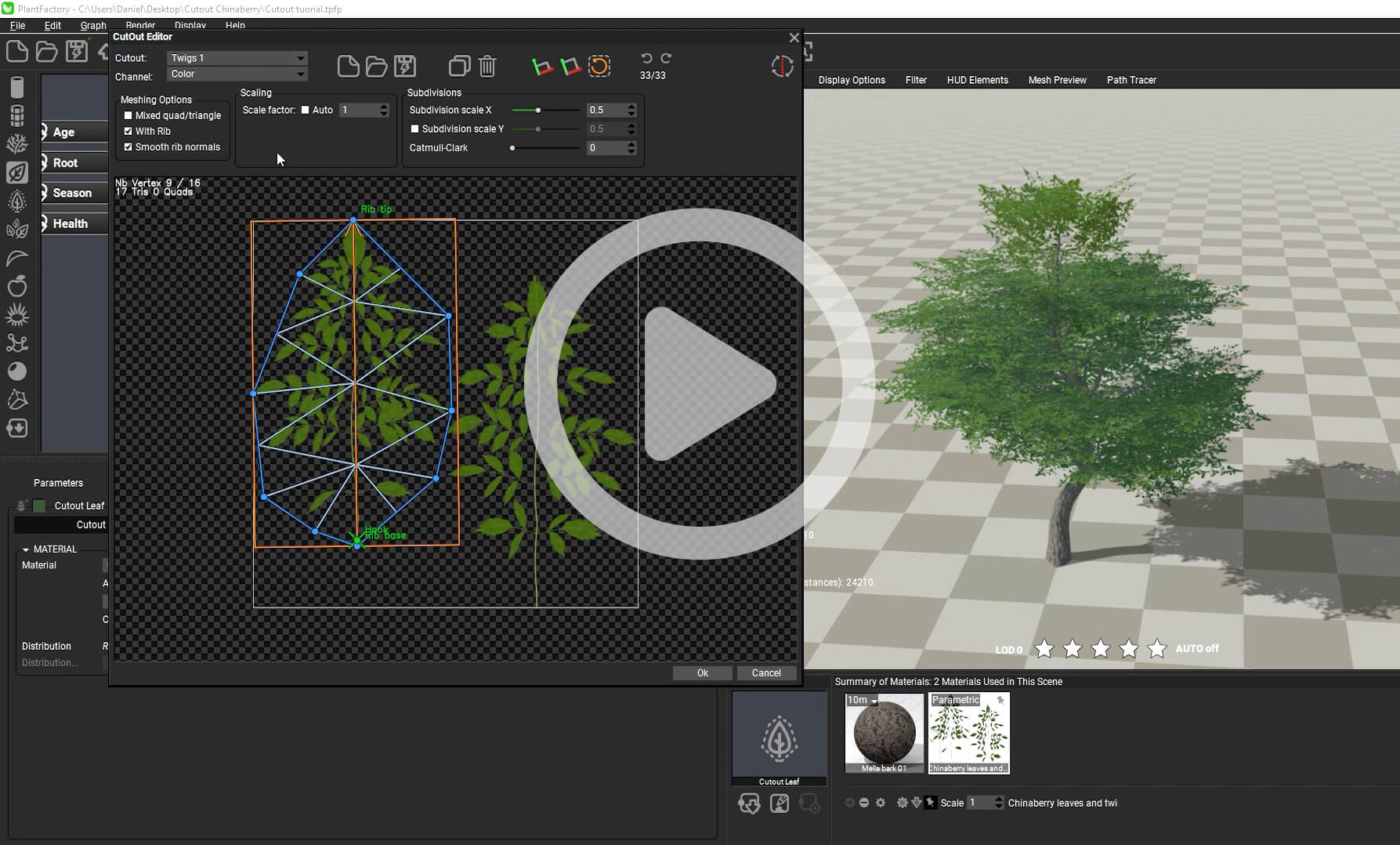 Watch the course in the Learning Center

The cutout node also includes a lateral profile editor for adding three-dimensional depth to the cutout mesh, an axis editor for deformation as well as gravitropism, twisting and midrib settings and support for ambient motion breeze in wind animations. You can also create alternate cutouts and cutouts in crossed-plane mode. LODs are supported too.

To help you getting started quickly, the cutout node ships with 42 preset cutout shapes.

PlantFactory now supports vertex colors as a post-processing effect once the final mesh has been computed. With vertex colors, you can store different pieces of information directly in the mesh upon export. Each vertex gets a color value assigned which can be interpreted and used in the target application in different contexts. For example, you can store a weighing factor between 0 and 1 for Ambient Occlusion strength (which will be mapped to a greyscale value between 0 and 255 RGB) to bake AO information without requiring a baked texture.

This release supports the following features as vertex color values:

You can create up to 8 vertex color sets per project and mix and match as many of these pieces of information within one set as you have channels available. Select in which channel you want to store which information as a vertex color (R, G, B, A or simply RGB in total) and PlantFactory will do the rest. Vertex colors are previewable in the viewport on a per-set and per-channel basis and they are computed for each LOD in the plant.

Ambient Occlusion in particular is editable in brightness, falloff, min and max strengths and in ground influence for artificial darkening of the base of a plant.

The post-processing options are also available within the PlantFactory integration plugins.

Building loops with iteration nodes has always been one of the most powerful methods for modelling trees. In this release, the capabilities have been extended tremendously through nested loops. You can now setup repeats within repeats. For example, create the branching structure of side offsprings first with a loop, then take this loop and place it as a bifurcation split on itself.

Watch the course in the Learning Center

As part of this addition, new capabilites and nodes were added:

This is an advanced feature that requires mastering a learning curve. To help you getting started, we recorded a multi-part tutorial series, covering everything you need to know about loops, nested loops and iteration nodes in general.

Meshing has received multiple improvements, most of them related to subdivision surface blending. All meshing parameters in segment nodes have been moved to a separate meshing tab.

Subdivision surface blending is now available in all meshing modes (previously, it only worked with quad meshing). The blending subdivisions can be increased separately without affecting the resolution of the rest of the mesh. This can eliminate cases where the blending would fail previously because of not having enough polygons to generate the blending. Also, if blending on a node fails, subsequent nodes can still exhibit proper blending without inheriting the "failed" blending from their parents.

The axial subdivision filter is now available in all meshing modes (it was only available with triangle meshing before). Using this filter, you can redistribute the polygon density along the axis (length) of a node. Please be aware that subdivision surface blending requires a minimum amount of axial subdivisions in the blending area and can override the polygon distribution from the filter curve when necessary. Additionally, the filter was also added to the flower node, allowing for more precise control and polygon reduction.

Finally, the polygon distribution in manual meshing mode can now be made dependent on a curve threshold. This saves massive amounts of polygons by only subdividing the mesh in curved areas.

The new instantiation node replaces individual geometry primitives with lightweight instances upon export. PlantFactory will generate a point cloud onto which copies of the geometry will be placed as instances.

As part of the point cloud, the scale, position and rotation of the instances will be randomized. This creates much smaller file sizes and lightweight files for better performance, especially in real-time engines.

Instance export is available for FBX and USD.

Continuing the node and graph editing improvements from the last release, we finalized the graph and node editing overhaul. Now you can work faster and more efficiently in the graph than ever before, which will speed up your daily workflow tremendously. 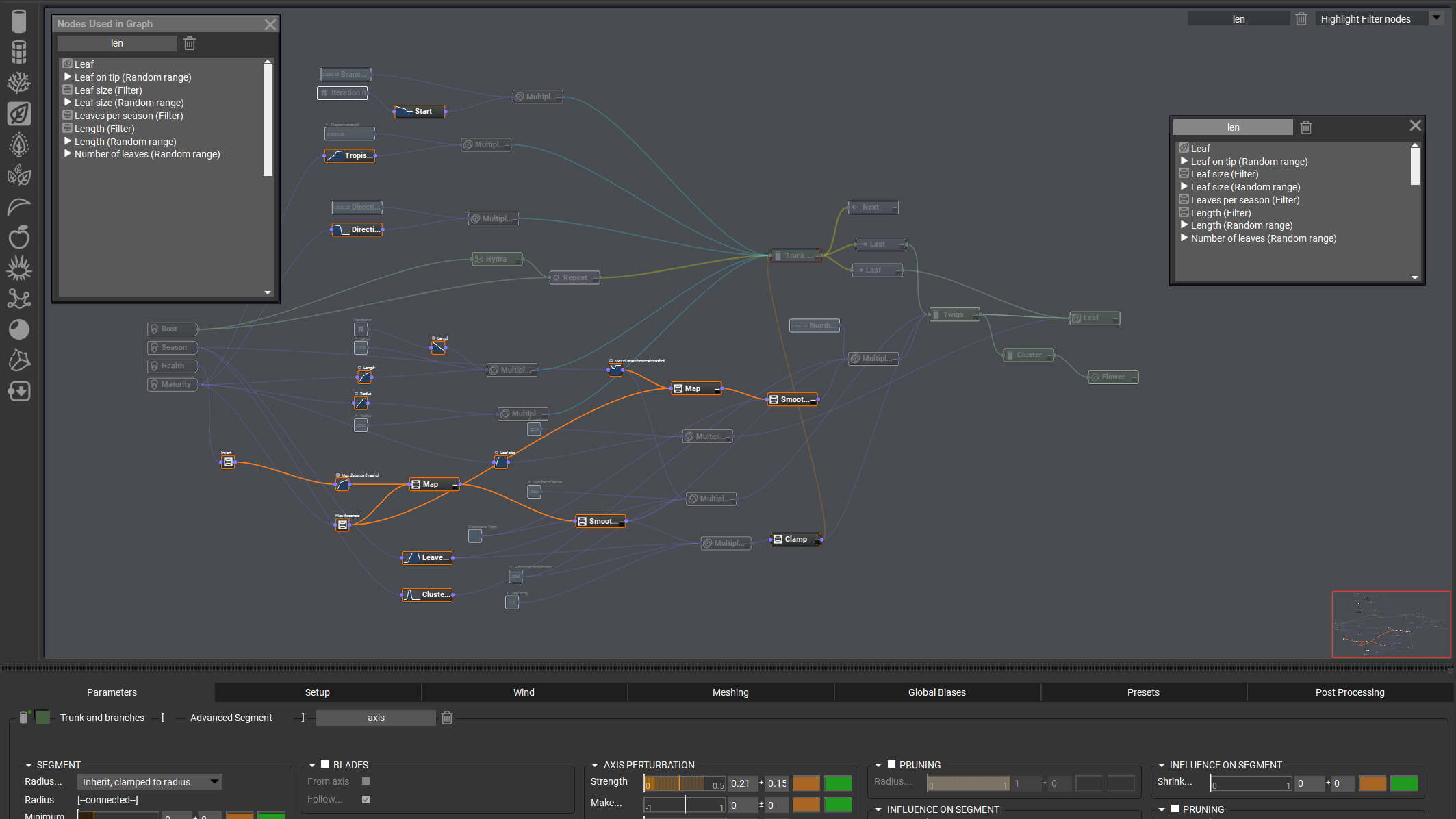 The PlantFactory integration plugin is now available for both Unreal Engine 4 and Unreal Engine 5. Load your procedural plants in *.tpf format into Unreal, customize them within the plugin and then convert them with native Unreal materials to static or animated actors in *.FBX format.

The new post processing options allow you to assign vertex colors easily within the plugin and preview them interactively in the viewport before converting. Nanite options such as "Preserve area" and "Enable Nanite" can be activated automatically by the plugin in Unreal Engine 5.1.

Heads up: Consolidation of presets and toolbars

As part of ongoing development and improvement of the UI, the following features have been deprecated:

Old scenes using preset nodes can still be loaded and edited without restrictions, but the deprecated nodes can no longer be used in new scenes.

We understand that removing features is a difficult decision, but we firmly believe these changes are for the better and will help both new and experienced users in the long run by eliminating potential sources of confusion. They will also allow us to come up with a new and improved preset system.


For a complete list of changes, check out the full release notes.

Enjoy the update and happy modeling from all of us here at e-on!