R5 is out! Make some noise for the new denoisers.

R5 is out, and it is one of the most packed quarterly releases that we have done to date. We tell you all about its features in this blog post.
News PlantFactory Release VUE
Share

the last months have been very challenging times for everyone. We hope you and your friends and families managed to stay safe and that you found some time and space for yourself between working, home-schooling and juggling all other daily duties.

Here at e-on, we’ve all been working remotely, too, and we have been busy preparing the R5 release of VUE, PlantFactory and the PlantCatalog from home. Head to the Software Center or the Trial page to get R5 right now. In this release, we put the focus on rendering improvements.

With R5, the following host applications and render engines are supported, with the new releases marked in bold:

For a detailed list of changes, check out the full release notes.

Read on to find out more about the main features of R5.

In a nutshell: the “dynamic” mode is especially suitable for displacement on terrains, “uniform” for displacement of low- to medium resolution objects and “no subdivision” is a huge time and memory saver for already highly detailed meshes where the base geometry offers enough polygon density for fine displacement details. Of course, these are merely suggestions rather than strict rules, and the right mode always depends on the scene and the object.

In conjunction with the improved displacement, we added a new Mesh Baking Dialogue which can be accessed with a right-click on any object. It is independent from the object export options and defines the mesh baking quality for displacement and other features. Because displacement is baked to polygons internally, it also works with the Path Tracer, even with procedural displacement functions. The quality you use is directly proportionate to the preparation time before a render. Less quality means shorter baking and preparation times. While you are working on the scene, using a lower baking quality will speed up preview renders. For the final render, you can push the quality to maximum. 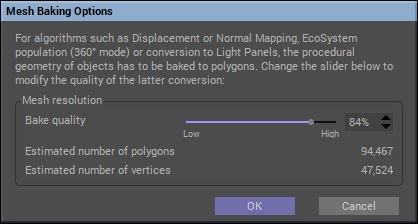 Finally, we vastly improved shadow terminator handling. The shadow terminator is a common problem in many render engines. At certain angles that should display a smooth falloff with soft shadows, the separating line between light and dark areas produces jagged results due to their underlying normals.

R5 introduces new interpolation methods to solve this shading artefact in both the Raytracer and the Path Tracer. To learn in detail about the new displacement methods, watch Barry’s tutorial video below.

The Path Tracer now includes two denoisers: The Nvidia OptiX and Intel Open Source Image Denoisers. The denoisers will remove noise from a path-traced render, based on machine-learning technology. Effectively, you can use less samples for rendering and remove noise automatically after the render is finished, which results in much faster rendering times. 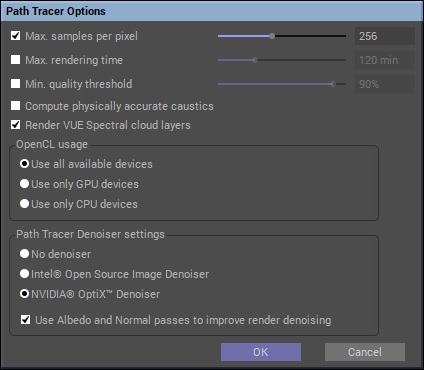 By automatically computing albedo and normal passes when you set the checkbox, the denoising quality is further improved. Find out more in the video below.

The real-world terrain import can now import satellite maps for automatic texturing of imported terrain data. Select satellite data from sentinel-2 or from USGS, and VUE will import the maximum available texture resolution together with the heightfield information of the selected area.

When you combine the imported texture map and heightfields with procedural functions, you can create great-looking terrains without the need to first design them. For more information, please watch the Tips & Tricks video below on how to import real-world heightfields and satellite maps.

In R4, we introduced cloud morphing. With this feature, you can morph one metacloud into another. Combined with the ability to convert objects into metaclouds, it is easy to create stylized animations or elaborate cumulus cloud shapes.

With R5, we improved this feature with support for material animation. Now it is not only possible to morph the cloud shape, but also the shading, color and all modulation functions.

In R5 we are continuing the release of official content from E-on. In this release of over 350 assets we have 29 atmospheres all of which have been rebuilt to suit the new Vue solution with beautiful results. This release also contains hundreds of 3D models ranging from a poseable Hammerhead Shark to a Bell Helicopter to the Palazzo dei Condottieri and much, much more.

Of course, VUE R5 includes many other enhancements and performance fixes. VUE will now automatically recognize the type of texture maps (color / albedo, normal, roughness and many more) when setting up a new material with texture maps. The naming conventions that VUE searches for are configurable. We have another tutorial for you on this topic below.

The Path Tracer now supports PBR channels with variable intensities through texture maps as well as semi-transparent and semi-reflective materials.

The Python documentation has been rewritten and new functions have been added. We moved also from Python 2.7 to Python 3.8, which offers more scripting options. Please note that due to this version change, you might have to check scripts you’ve written previously and update them to the current Python standard, or they might not work correctly.

Substance Support has received some love with new rotational options, better performance and the enhanced displacement of VUE R5.

In the Function Editor, we added a new Constant Slider node in the Constant – Connectable Constant category, which enables the creation of sliders with custom ranges and steps for creating custom top-level (published) interfaces.

Additionally, there are improvements to the scene preview, more image formats (support for Terragen *.ter is back!), a long list of bug fixes and other performance improvements.

The R5 release of PlantFactory focuses on PBR workflow and pipeline integration. Of course, it also includes all the additions from VUE, such as the denoisers for the Path Tracer and the new displacement methods within a material.

PlantFactory has received a facelift – but it’s more than just cosmetics. The new viewport is 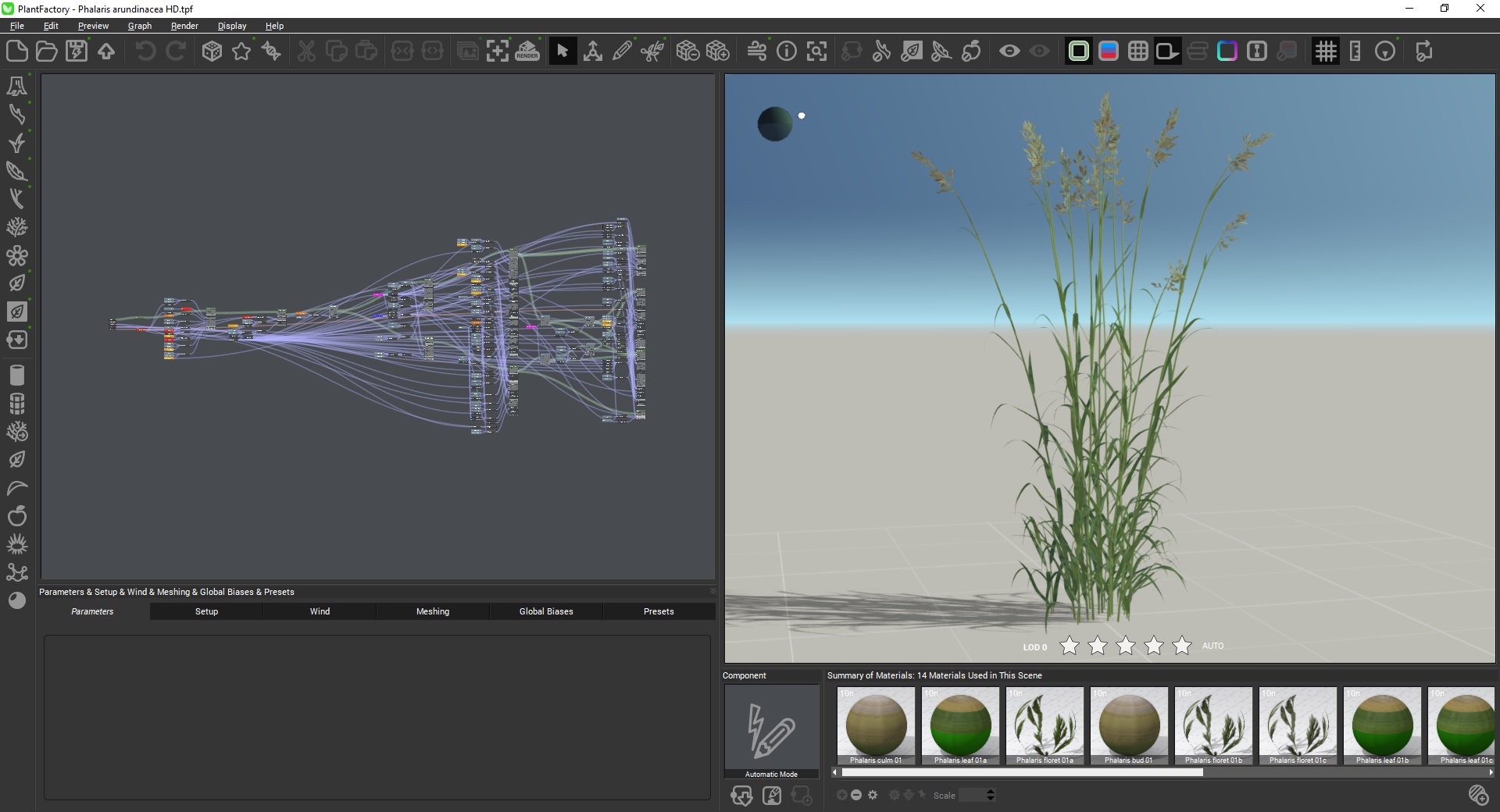 The new viewport can be activated with a right click into the 3D view and going to “Options” in the context menu. There, you can switch between the classic uniform grey sky and the new sky with settable colors. To edit the sky colors, go to File – options and then edit the interface colors. In the top right corner, you will find four new colors for the sky and ground gradients.

Due to the enhanced viewport, creating and tweaking (PBR) materials is now a lot more comfortable.

Find out more in the video below.

Technology preview: Support for Arnold and for V-Ray Next in Maya & 3DS Max

This release adds support for Arnold materials and for V-Ray Next in both Maya and 3DS Max. Simply set your target render engine, then load a PlantFactory plant with the integration plugin and convert it to a native Maya or 3DS Max object. During conversion, the plugin will automatically generate the right materials for the chosen render engine.

Because this is a technology preview, there are some known display issues (e.g. not all materials showing up with two-sided materials in a plant) in the OpenGL viewport when using Arnold in 3DS Max, but which have no negative effect on rendering. We are actively working with Autodesk to resolve this and will update the plugin accordingly.

The new plants of this quarter’s PlantCatalog release are amazingly well suited for groundcover and forest work. The Reed canary grass (phalaris arundinacea) looks fantastic in any scene that benefits from ultra-realistic grasswork. It is one of the best species that our internal biologist Frédéric Bec has produced yet, and thanks to its built-in plant engine, you get dozens of grass types within a single species.

Next, we have the Tamarisk thuidium moss (thuidium tamariscinum), which is perfect for forest and woodland sceneries. Again, the amount of versatility and variability built into the species is astounding.

Deer fern (blechnum spicant) will further enrich your groundcover renderings, while the new coniferous trees will provide just the right amount of shade for the fern and moss to grow. In total, there are 15 new species to explore. 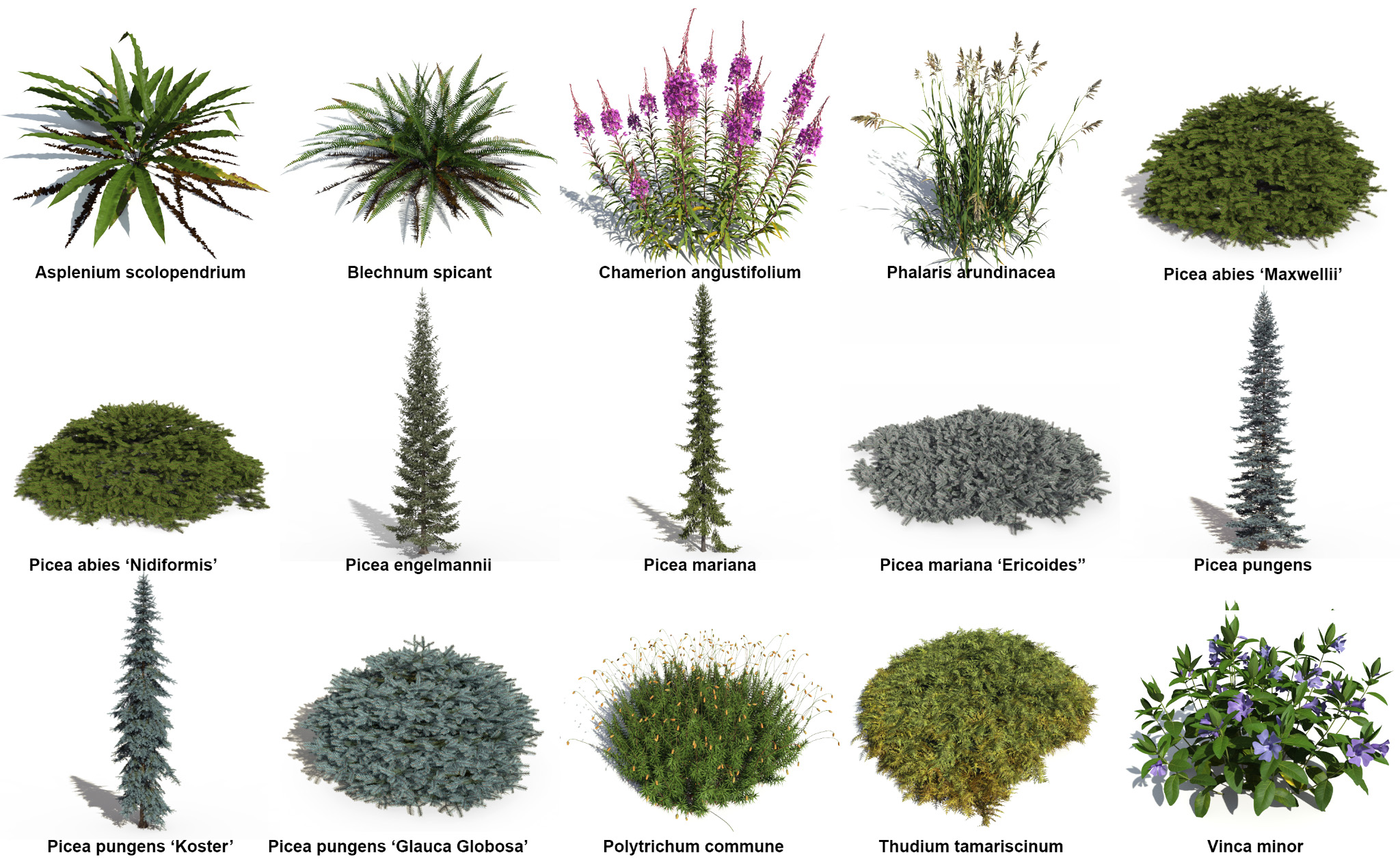 If you are an Enterprise solution customer, head to the software center and download the new plants immediately. If you are under the Creator or Professional plan, you can get under the PlantCatalog subscription plan separately.

Both VUE and PlantFactory now point to a common PlantCatalog directory. You can edit the file path under File – Options in both programs. So, there’s no more need to copy and paste the PlantCatalog plants into two separate directories. Both programs will share the same folder.

Starting with this release, all plants also have built-in color variations for Ecosystems in VUE. Because the variations are included in the plant, it is not necessary to set them up manually in an Ecosystem. Also, perennials now feature a slider and presets that make them grow along a wall or other away obstacles, which simulates natural growth behavior, e.g. also on the edge of cliffs.

We wish you lots of fun with the new release. Stay safe, stay healthy and stay at home.

New update for PlantCatalog is out